It is reported that Olalekan Ayoola, a 23-year-old man, yesterday told police in Lagos how he hacked into people’s bank accounts with a software application to withdraw money.

Meanwhile according to New Telegraph, Ayoola’s confession led to the arrest of other suspects – Sodiq Olalere, Ayobami Adebayo (21), Muftau Ibrahim (25), Ogundiran Adeniyi (24), Emmanuel Chukwu (25) and Dare Oyetola (32). They were arrested at Alaba area of the Lagos metropolis.

“I can hack into some banks which do not have security with ease as well as customers’ accounts after stealing their Automated Teller Machine (ATM) cards.

“I was thought how to use software called Futa by one Lanre. After robbing the victims of their ATM cards, I will copy the security number on the card and use the software application to know the amount of money the persons have in his or her account. 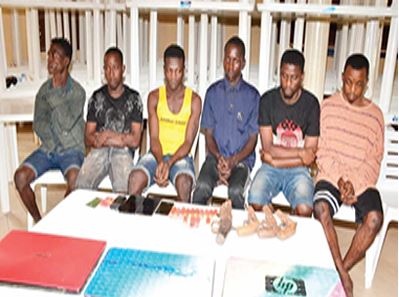 “After I have discovered the money, it is still the same software application I would use to transfer the money into my own personal account and then withdraw it.

“Since I started the robbery operations I have made about N500,000 but I don’t take the money alone, I always share it with my members and the person who thought me how to use the software application.

“I regret my actions. Police should forgive me and give me a second chance. I will definitely stop it if I am set free. I am tired of my actions,”Ayoola said.

The state Commissioner of Police, Imohimi Edgal, who paraded Ayoola among other suspects at the command headquarters yesterday, said about 12.30a.m. on October 7, he received information from a credible source that some armed robbers were sighted making unauthorised withdrawal at Stanbic Bank at Alaba branch, using stolen ATM cards from unsuspecting members of the public.

Edgal said based on the information, operatives from Ojo Police Station and Federal Special Anti- Robbery Squad (FSARS) were swiftly mobilised to the scene and two suspected robbers were arrested while others escaped.

He said: “During interrogation, the suspects confessed to belong to a group of armed robbers popularly called ‘Blue Water Boys’ and they have been terrorising residents of Ojo, Agric, Okomaiko, Ajangbadi, Ijanikin, Iba and its environs.”

The commissioner added that the suspects further confessed to have robbed the owner of a restaurant at Araromi Street, Iba and in the process dispossessed the victim of some ATM cards and phones.

He, however, said the suspects would be charged to court after completion of investigation.

This site uses Akismet to reduce spam. Learn how your comment data is processed.